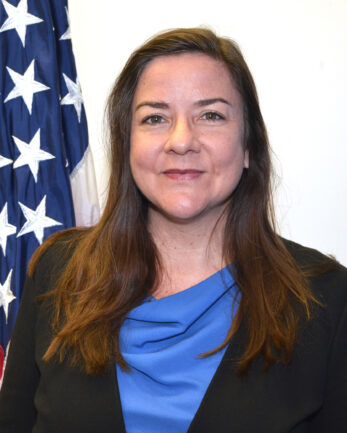 Amy Tachco assumed her position as Deputy Chief of Mission in Kingston, Jamaica in August 2022.  She joined the U.S. Department of State in 2002 and is a career member of the Senior Foreign Service. From 2020-22, she was Director of Regional and Multilateral Affairs in the Bureau of Near Eastern Affairs of the Department of State.  Before that, she served as Deputy Director of West African Affairs at Department headquarters in Washington, and she led the UN Security Council team as Political Minister Counselor at the U.S. Mission to the United Nations in New York.

Ms. Tachco has held overseas assignments in Karachi, Casablanca, Madrid, and Beirut, and served as Political Counselor at U.S. Embassy Damascus in the run-up to closure of the mission in 2012.  Additionally, she was Foreign Policy Adviser to the Commander of United States Naval Forces Central Command and the U.S. Navy Fifth Fleet, based in Manama, Bahrain.

A graduate of Smith College and the Graduate Institute in Geneva, she speaks French, Spanish, Italian, and Arabic.