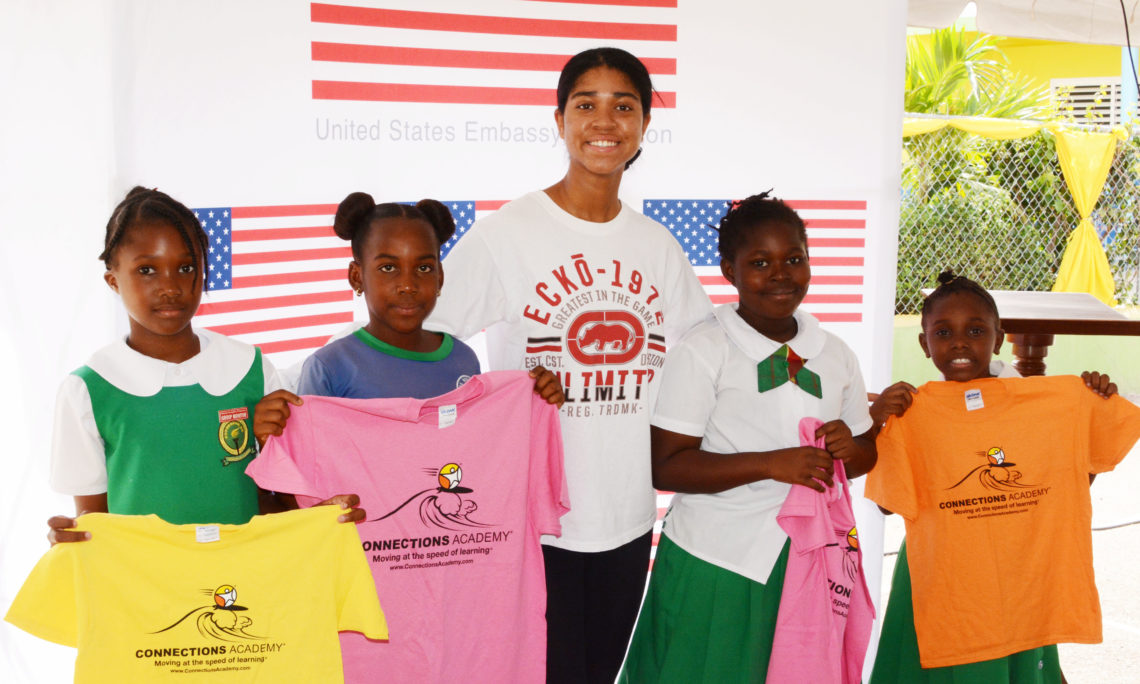 Zuriel poses with Mona Heights Primary School students. The girls, most between ages 9 and 12, enjoyed sharing their career goals, which ranged from becoming lawyers, doctors, and teachers to entrepreneurs, police, chefs, and astronauts

KINGSTON, Jamaica –  At just 16, U.S.-based girls’ education advocate and filmmaker Zuriel Oduwole has met more presidents and prime ministers – 30 and counting – than many ambassadors. However, she most enjoys meeting, inspiring, and encouraging young women. This was evident during her visit Tuesday to Mona Heights Primary School, where Oduwole spoke to 200 female students about the power to make a difference, regardless of age.

The school visit was coordinated by U.S. Embassy Kingston, and was the last stop on her five-day visit to Jamaica, which she used to learn more about the country for upcoming girls’ education projects.

Oduwole’s rise to prominence started at age of 9, when she entered a History Channel competition with a documentary film about Africa titled “The Ghana Revolution.” For the film, she traveled to Ghana to interview then-president Jerry Rawlings. While there, she learned that many girls in Ghana and other African countries did not have access to education, and as her interest in filmmaking grew, so did her desire to serve as a voice for girls in Africa, including because of her Nigerian-Mauritius roots.

At 12, she became recognized as the world’s youngest filmmaker to have a self-produced and self-edited work, after her film “A Promising Africa” showed in two movie chains and then went on to screen in Ghana, England, South Africa, and Japan. Since then, she has produced seven films and visited 17 countries for her girls’ education projects. The activist-filmmaker leverages her notoriety to raise awareness about societal challenges that hinder girls from reaching their full potential.

“It is astonishing that she accomplished all that at such a young age,” said 11-year-old Alissen Bowley. “It shows the sky is the limit and you can do anything you put your mind to.”

During her talk, Oduwole shared her experiences as a young filmmaker and encouraged the girls to set and achieve high goals. In turn, the girls eagerly shared their aspirations.

“You all are the future of this country,” Oduwole told the girls. “So it is up to you to make sure that whatever it is you want to do in life, you accomplish it. Because whether you want to become a doctor, lawyer, pilot, or even prime minister, whatever it is you’re going to do is going to help others. So you have to stay driven and stay focused.”

Mona Heights Primary School Principal Fabian Mahabeer was pleased that his students were able to meet the 16-year-old powerhouse.

“It was phenomenal given that Zuriel could connect with the audience because she is not much older than they are,” Mahabeer said. “Her message is contemporary. It speaks to a lot of what is going on, especially gender-based violence and the care for children. “

U.S. Embassy Kingston is honored to engage with students within its community and sphere of influence. This activity forms part of the Mission’s wider effort to promote democracy, security, and economic prosperity through cultural and educational exchange.