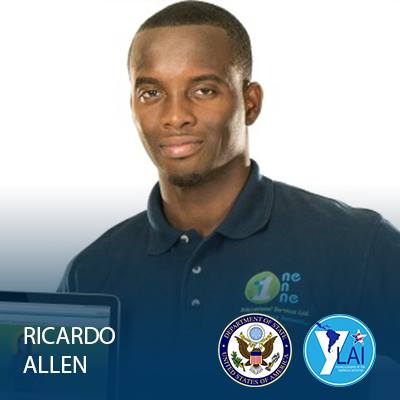 Driven, is the word which fully defines Ricardo Allen, Jamaica’s participant in the Youth Leaders of the Americas Initiative (YLAI), who was selected by the U.S. Department of State.  President Barack Obama announced YLAI during his historic visit to Jamaica in April 2015.  This pilot program of the Initiative will send 23 young professionals from across the Americas to the United States, for a three week fellowship starting February 25, 2016.

Ricardo’s entrepreneurial talents bloomed early: while still in university he founded One-on-One Educational Services, a Jamaican-based company incorporated in 2013. He has transformed his interest in academics and his passion for helping others into an innovative business dedicated to providing effective and affordable face-to-face courses. One-on-One has won several awards including the Best Innovation in Education award from Jamaica’s National Innovation Awards.

In his interview for the YLAI fellowship, Ricardo told the U.S. Embassy that he lives his life by the belief that when “your back is against the wall, the only way to move is FORWARD”.  After graduating from Jamaica College, he secured three scholarships to attend the University of the West Indies where he pursued Actuarial Sciences.  Ricardo completed his degree while providing for his family including younger siblings, after which he started to pursue a corporate career.  However, he could not ignore his entrepreneurial passion.

He plunged ahead, grew his business, and he’s now the CEO of a fast growing start-up with over 4000 users that has attracted over $8 million in investment.  During this White House fellowship, Ricardo and his cohort will work with business incubator organizations in Miami, Florida; Charlotte, North Carolina; Denver, Colorado; or Seattle, Washington.  There they will learn business development skills and financial models suited to tech-oriented projects.  Participants will also attend CEO roundtables and have the opportunity to participate in a pitch session with American venture capitalists.

Upon hearing about Ricardo’s selection to this prestigious program, United States Ambassador to Jamaica Luis G. Moreno heartily congratulated him on his outstanding achievement, saying “Ricardo’s determination and resilience are the very qualities we know any emerging leader needs.”  The Ambassador also said that he is “confident that Ricardo will take full advantage of these opportunities to advance the growth of entrepreneurship in Jamaica and the region.”

The U.S. Mission, Kingston offers professional enrichment and academic opportunities through a variety of programs.  To learn more about these opportunities visit our website at kingston.usembassy.gov or like us on Facebook at USEmbassyJamaica.