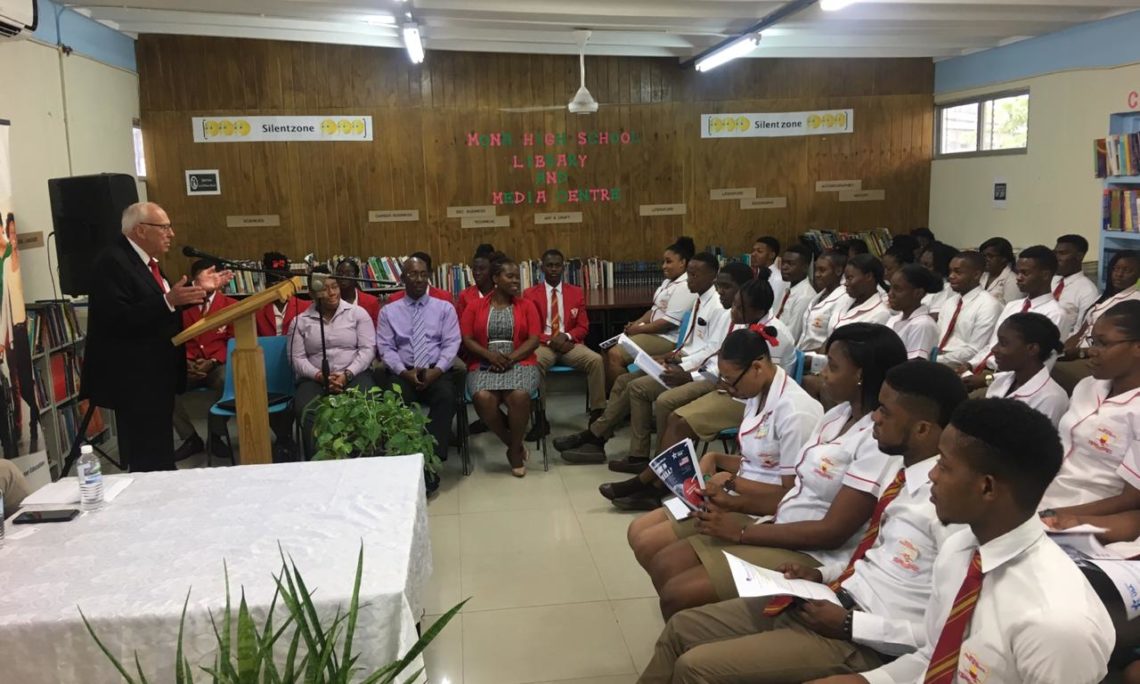 Donald Tapia desires to leave a positive and powerful footprint during his tenure as U.S. Ambassador to Jamaica. High on his to-do list is assisting the country in strengthening the economy and working collaboratively with the government to curb violence and crime. However, closest to his heart is being recognized for his work to promote education.

In only his third week on the island, Tapia kicked off the first of many school talks at Mona High School on Sep. 16. Coordinated by the U.S. Embassy’s Public Affairs Section, these visits will allow the Ambassador to personally connect with students throughout Jamaica. Tapia believes the country’s most prized asset is not its world-renowned beaches or culinary delights, but its youth. However, in order to realize their full potential, a good education is necessary.

At Mona High School, he shared his own educational journey with approximately 40 final-year students. Reflecting on his childhood and growing up in a poor family, he remarked, “I am a dream come true, and when I look out here, I see a lot of dreamers.”

Students were surprised to learn that he graduated with his bachelor’s degree at age 61 from Saint Leo University, realizing a life-long dream he deferred after joining the U.S. Air Force after high school and then embarking on a successful career in business.

Tapia credits his oldest granddaughter’s commitment to earning her degree for inspiring him to earn his. Just as interesting, while that feat would have been enough for most people, the value he placed on education led him to also pursue his master’s degree from his alma mater. And he did so in secret—taking classes after work and not even telling those closest to him. In fact, he says his family did not know about the passion project until the day they received graduation invitations in the mail. He was 67.

“That was commendable,” said Mona High School student Gawayne Wright, who desires to study physics. “It proves that age doesn’t mean anything because you can be any age and go for what you really want in life. I found his speech inspirational.”

“I really like the way he sticks up for education among youth,” said Mona High School student Tre Henry. “His talk urged me to move forward and to set actual goals.”

Students were also surprised at how accessible the Ambassador was.

“He was very funny and relaxed, and we could have a conversation,” said future lawyer Timerah Campbell. “I was excited that he took the time to come and visit us.”

Tapia plans to share his life story and views on education through more school talks. The U.S. Embassy will soon request that people suggest schools, so stay tuned via their social media platforms.