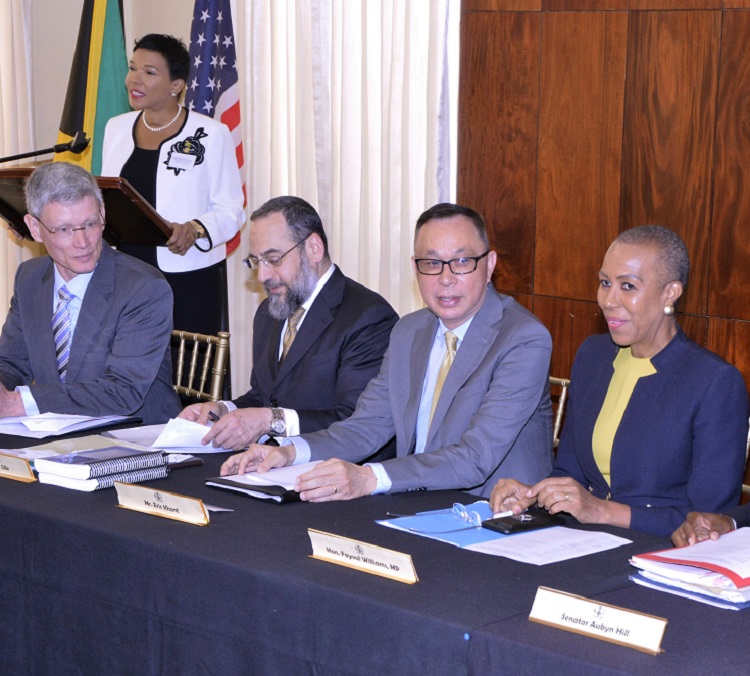 On Wednesday, February 27, representatives of the U.S. and Jamaican governments convened the first Working Group session under the U.S.-Jamaica Energy Investment Framework.  The U.S.-Jamaica Energy Investment Framework was signed by U.S. Secretary of the Treasury Steven Mnuchin and Jamaican Prime Minister Andrew Holness on November 28, 2018 in Washington, D.C.  The cooperative effort is part of the larger U.S. Government America Crece (“The Americas Grow”) ENERGY initiative, which is designed to catalyze private sector capital into energy projects throughout the Western Hemisphere by addressing specific regulatory, legal, and market barriers that may exist.

The Working Group was led by Minister of Science, Energy, and Technology Fayval Williams, Jamaica’s Ambassador to the United States Audrey Marks, Senator Aubyn Hill, and Jampro President Diane Edwards on the Jamaica side.  The United States delegation was led by Treasury’s Deputy Assistant Secretary of Overseas Investment, Energy and Infrastructure Mitchell Silk, Acting Deputy Assistant Secretary of Western Hemisphere Affairs of the State Department Dale Eppler, and Chargé d’Affaires Eric Khant.  The U.S. delegation included representatives from the Departments of State and Treasury, the U.S. Trade and Development Agency, Overseas Private Investment Corporation, the U.S. Agency for International Development, and the U.S. Embassy in Jamaica.

“We congratulate Jamaica on its leadership role in the region for its energy sector transformation, including using cleaner fuel sources.  We believe this is what makes Jamaica the ideal host for the fourth Energy and Climate Partnership of the Americas Ministerial, and are confident that the entire region will be inspired by Jamaica’s path to a cleaner and more resilient energy sector,” said Chargé Khant. “We have enjoyed a fruitful partnership with Jamaica over the years to play a part in Jamaica’s transformation.  This commitment was renewed under U.S. Strategy for Engagement in the Caribbean – better known as Caribbean 2020 – in which we aim to help reduce the historical challenges that the Caribbean faces with achieving low cost, reliable, secure energy.”

The U.S. and Jamaican governments discussed a broad range of issues, including the potential for investment in liquefied natural gas receiving infrastructure and the possibility of greater natural gas utilization in Jamaica, including in the power, industrial, and transportation sectors.

The sides also discussed the potential for developing utility-scale renewable energy generation, implementing mini- and micro-grid technology to bolster electricity reliability and resilience against extreme weather events, the need to improve energy efficiency in buildings and industrial operations, and the desire to phase out legacy heavy fuel oil and diesel power plants for cleaner natural gas and renewable energy generation. The Working Group also convened a networking event with the private sector to orient them to the initiative with a goal of incorporating these stakeholders in future discussions.