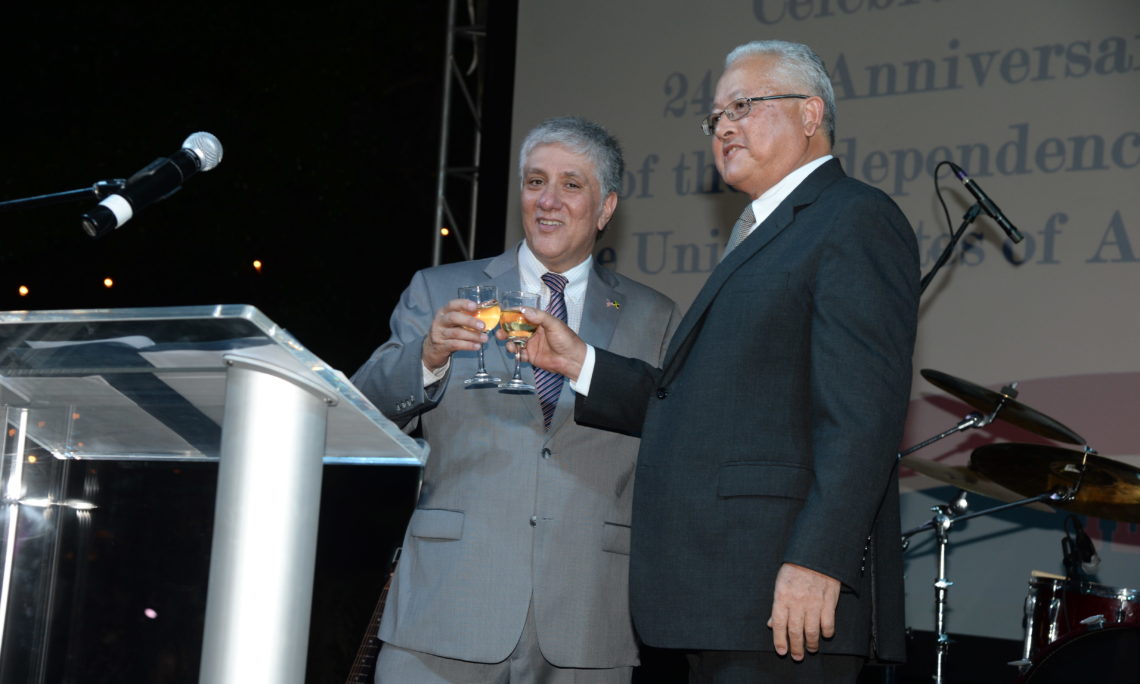 On Monday July 4th The Embassy of the United States of America in Kingston celebrated the 240th Anniversary of the Declaration of Independence, July 4th, on the East Lawn of the historic and iconic Devon House.

The evening of splendor was characterized by Texan hats and Tex-Mex Cuisine amidst a sea of red, white and blue.  Such was necessary as, U.S. Embassy Kingston sought to celebrate America’s accomplishments, Texan Style.  Over 600 guests including, government officials, members of the business community and civil society basked in the evening’s festivities.  Texan tunes were delivered by the San Antonio based band MC & The Mystyx who gave a high energy performance.  Their set showcased a mix of country, rock and R&B, which kept persons rocking throughout the night.

United States Ambassador to Jamaica Luis G. Moreno delivered an impactful speech as he elaborated on the economic, security and social gains through effective partnerships between the governments and people of Jamaica and the United States See Full Speech.  Similar sentiments were shared by Jamaica’s Minister of Justice, The Honorable Delroy Chuck, who delivered the Government of Jamaica’s official address.

One significant highlight from the evening’s event was the soft launch of the HeForShe Jamaica Campaign. Ambassador Moreno urged all in attendance to take a stand against gender based violence and the oppression of women through this unique initiative. HeForShe is a solidarity campaign for gender equality initiated by UN Women. Its goal is to engage men and boys as agents of change for the achievement of gender equality and women’s rights, by encouraging them to take action against negative inequalities faced by women and girls. Grounded in the idea that gender equality is an issue that affects all people – socially, economically and politically- it seeks to actively involve men and boys in the movement.

The local campaign which is being led by the U.S. Embassy in partnership with UN Women Multi Country Office-Caribbean, Ministry of Culture, Gender, Entertainment and Sport and Respect Jamaica is being supported by the British High Commission, Canadian High Commission and the EU Delegation.

As part of the initial campaign, the U.S. Embassy shared a 90 second video featuring Jamaicans who endorse the message and goal of HeForShe.  Participants include The Honorable Olivia ‘Babsy’ Grange, Ambassador Usain Bolt, Shaggy, and Beenie Man.  The video also features campaign specific lyrics penned by Omi, based on his global chart topping hit Cheerleader.

Jamaica’s HeForShe Campaign will be fully launched in late July 2016 and continues to seek local supporters who will join over 1.3 million people globally who have committed to HeForShe initially launched by UN Women in 2014.