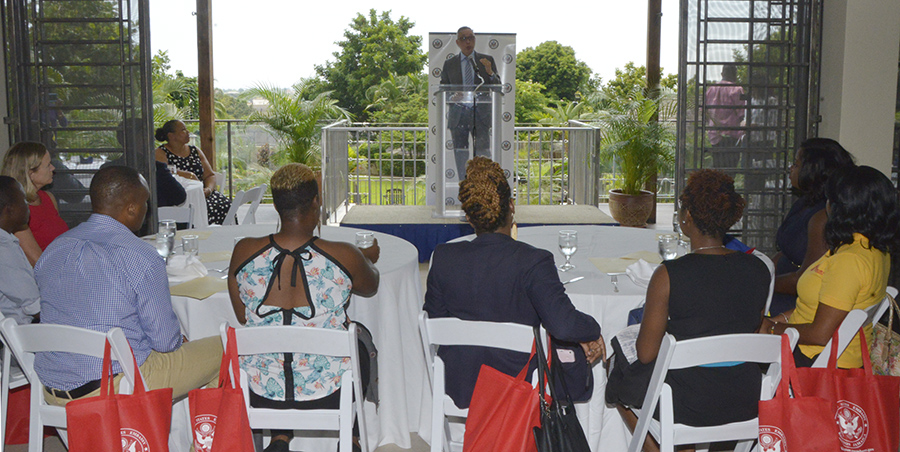 The U.S. Embassy proudly announced the 2017 Jamaica cohort for the Young Leaders of the Americas Initiative (YLAI) on September 22.  The event was hosted by the Embassy’s Charge` d’Affaires Eric Khant at the Chief of Mission residence in St Andrew.

Eight Jamaican young entrepreneurs will travel to the United States during October to participate in the YLAI Fellowships, which includes both a professional exchange component whereby participants are hosted by U.S. companies and work alongside them, as well as cultural programs during which they can explore the United States.  The 2017 Jamaican YLAI participants are: Christine Daley, Carey-Lee Dixon, Kiddist McCoy, Randy McLaren, Fonnique Miller, Dave Oakley Charah Watson and Neish McLean.

The YLAI program supports the United States’ commitment to increase trade and investment in the region. In his remarks, Charge` Khant commended the participants and emphasized that they are the future of Jamaica. “You are able to influence the economic ties between Jamaica and the United States.” He also mentioned that the fellows will have the opportunity to influence Jamaica’s position by changing economic policies and shaped the lives of people in the society, Caribbean and beyond.

Through this exchange program, fellows will advance their entrepreneurial ideas and develop leadership skills to effectively contribute to the social and economic development of their communities. Fellows return to their businesses with new skills, resources, continued support from U.S. counterparts and an improved network, strengthening trade ties between the United States and Latin America and the Caribbean.

The fellows will join over 200 young entrepreneurs from the Caribbean and Latin American to participate in a three-week program in the U.S. The U.S. Embassy’s support of the program serves to strengthen our economic partnerships with Jamaica to empower the island’s young leaders.