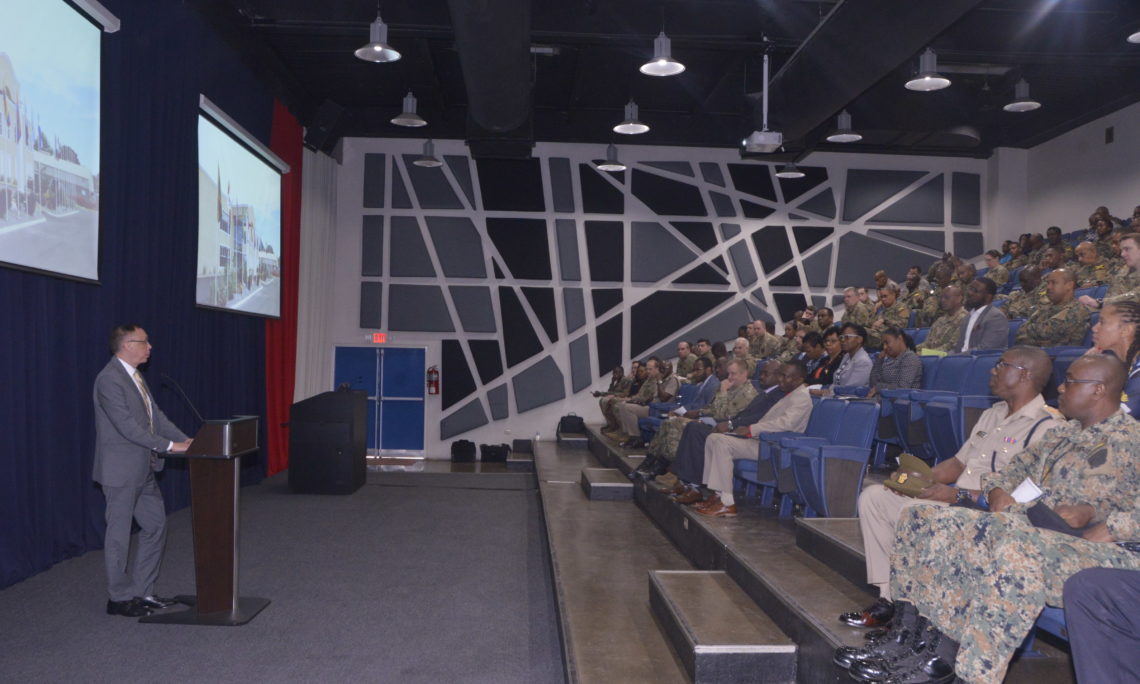 Kingston, Jamaica – U.S. Embassy Kingston hosted the District of Columbia National Guard (DCNG) May 13–17 for a military-to-military exchange focused on strengthening Jamaica’s National Disaster Action Plan. The DCNG conducted a table-top exercise, in partnership with the Jamaican Defense Force (JDF), the Ministry of Local Government and Community Development, and the Office of Disaster Preparedness and Emergency Management (ODPEM), to examine the potential destruction a major earthquake could cause throughout the island.

“We have had substantial opportunity to have rehearsals and practice in response to disasters in the form of tropical storms and hurricanes,” said JDF Lieutenant Colonel M Matthews during the joint earthquake table-top exercise outbrief on May 17. “Earthquakes, we believe, were a constantly looming threat, and one that we do tend to put in the back of our minds having not experienced a recent significant earthquake.”

For this exercise, DCNG, JDF, and ODPEM staff worked alongside each other to develop a plan to contend with all real-time issues should an earthquake occur. The plan carefully details the steps and resources that would need to be mobilized to mitigate the disastrous effects of an earthquake on Jamaica’s populace and infrastructure. Experts from the United States Agency for International Development (USAID) a also monitored the exercise, noting strengths and gaps in disaster response to inform the design of upcoming resilience projects worth $9 million.

“There is no level of brilliance, no level of operational resources that can replace planning, preparation, and practice, said JDF Lieutenant General Rocky Meade, stressing the critical nature of the exercise.

The Embassy’s Chargé d’Affaires, Eric Khant, lauded the exchange, describing it as “a critical partnership for disaster readiness.” He also asserted that “this activity will underly future planning and identify ways where the United States can continue supporting Jamaica’s preparation for a natural disaster, including humanitarian assistance.”

This activity forms part of the DCNG’s State Partnership Program (SPP). This is a joint program of the United States Department of Defense (DoD), the U.S. State Department, District of Columbia, and individual states or territories, including Jamaica. The SPP has been successfully building relationships for over 20 years with 79 nations around the globe.